The Sparta Score provides a convenient single metric to assess movement efficiency and Movement Health. Based on Load, Explode, and Drive, this metric captures multiple aspects of movement.

The Sparta Score is a proprietary algorithm calculated from Load, Explode, and Drive rewarding high magnitudes of force production and balanced, or efficient Movement Signatures. These two concepts are desired for all individuals as they represent a greater global movement efficiency and better relative Movement Health. In general think of it on a scale of 100, with 85 (a solid B) being a critical threshold for many performance indicators.

The Sparta Score will increase as a byproduct of improving each individual’s lowest variable. Obviously, when good training (and regeneration) takes place the Movement Signature will grow in magnitude, but also become more balanced yielding improvements in health and performance. Therefore, using your Sparta Score as a reference point is a great way to see trends both positive and negative.

The signatures above give an example of three different Movement Signatures and their corresponding Sparta Scores. As you can see, the signature with the highest magnitude and relative balance has the highest Sparta Score (92). Meanwhile, the middle Movement Signature has a variable nearly as high as the the user on the left (71), but since there is a lack of efficient force dispersion (represented by Load and Explode) they have a much lower Sparta Score (77) and therefore movement efficiency.

Why the Sparta Score?

Initially, we were very hesitant to develop a single number score or "algorithm" as we were concerned with whether or not that single number would be useful or trusted, but after consistent feedback from customers, the Sparta Score was eventually developed.  This one single number allows for a few key benefits when compared to looking at the full spectrum of data that can be provided from the Jump Scan:

1. It allows us to easily rank individuals and create thresholds for further investigation. For example, some of our partners utilize specific cutoffs to further evaluate individuals who fall below those thresholds.

2. It allows for better motivation for individuals to improve and focus on movement quality.

Instead of having multiple numbers to understand, an individual end-user can easily interpret and relate to a higher total score being better, even if that means a single value may have gone down. For example in the graphic at the top, if an individual's Drive decreased from 71 they may view that as bad, but if it creates a more efficient mover it is actually good!

The Sparta Score will continue to improve and evolve over time as we continue to collect more data and insights.

What is a good Sparta Score?

The average Sparta Score across our entire database is around 79, with the all-time high score coming in at 105. With the Sparta Score, in general a higher score is better, but what is "good" often needs to be interpreted within the context of the cohort or population. 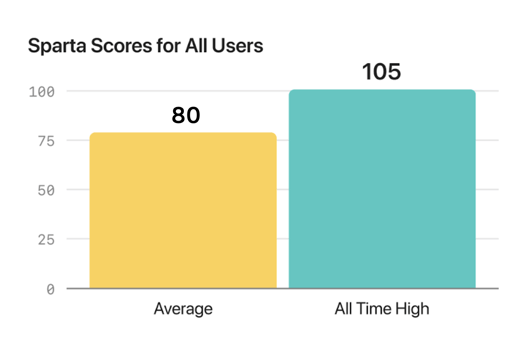