This article provides an overview of the methodologies and key benefits for the presentation of data within the Sparta Movement Health Platform.

The Sparta Movement Health Platform takes a layered approach to data and results from the different force plate scans. Besides the time-series (1000 Hz) and raw calculated data, the SMHP is able to leverage the 10+ years of aggregate data to provide sex and age normalized data utilizing t-scores (similar to z-scores) to provide additional context and interpretability of metrics.

Normalizing data is a process in which data values are adjusted to a common scale. Z-scores and percentiles are two familiar ways to normalize data, commonly used in standardized educational testing and healthcare.

The visual below shows a variety of ways data can be normalized. In this histogram, population (or cohort) data is plotted along a normally distributed curve to determine the mean (or average) and standard deviation (or variation), enabling the data to be displayed and interpreted through the context of that population or cohort. 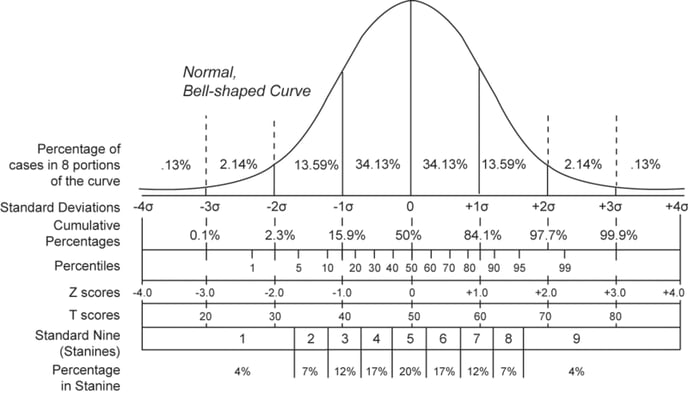 Z-scores, a well-known technique, normalize the data so that 0 represents the mean or average and the standard deviation (SD) is 1.

T-scores are similar to z-scores; however, the values are scaled differently, where the mean is 50, and the SD is 10.

Normalizing the raw data as a t-score was first suggested by researchers to simplify the interpretation of bone density results. This normalization enables practitioners and individuals to understand how a patient’s bone density results compare to a population or cohort instead of attempting to interpret the raw value.  For example, a BMD score of 35 (or -1.5) can be easily interpreted as one and a half standard deviations below the mean, while a raw BMD score of ​​0.928 g/cm2 would require more contextual information, familiarization, or existing knowledge and experience for interpretation. T-scores are additionally utilized commonly in standardized psychological testing.

Simplifying complex or unfamiliar metrics is relevant for interpreting many metrics derived from force plates. While there are some metrics derived from the high-frequency time-series data that are easily interpretable (e.g. jump height displayed in centimeters or inches), the majority of derived metrics and their normal ranges are unfamiliar to human health and performance practitioners.

Normative Data in the SMHP

There are a vast number of ways data can be normalized and presented that can improve the usefulness of the data and provide better insight. The SMHP platform provides complete and transparent access to time-series and other raw calculated data for all customers, often utilized in research and analytics, as well as cohort (sex and age) normalized versions of these metrics (more below).  Additionally, the SMHP highlights specific metrics that are specifically optimized for accuracy and usefulness, leveraging our secure data lake, machine learning, data scientists, and human health and performance experts.

The methodology here at Sparta Science is to apply modern data science optimizations to established clinical best practices in order to provide the most useful and scalable Movement Health Platform possible.

In order to achieve this, a series of complex decisions are made (e.g. what normalization techniques? what types of models? what visualizations?) to generate these optimized results. We utilize various standard statistical, computational, and machine learning tools to accomplish this. Sparta Science is happy to provide transparency on these details when relevant and is actively pursuing peer-reviewed research and development.

The simplest level of normative data within the SMHP normalizes the individual results based on sex (Male, Female). The calculated metrics are normalized to our 10+ year aggregated dataset based on the sex entered into the individual user profile and displayed to the user. This data is normalized using t-scores, where the mean is 50, and the standard deviation (SD) is 10.  Note that the raw data is also visible within the Movement Panel (see below). 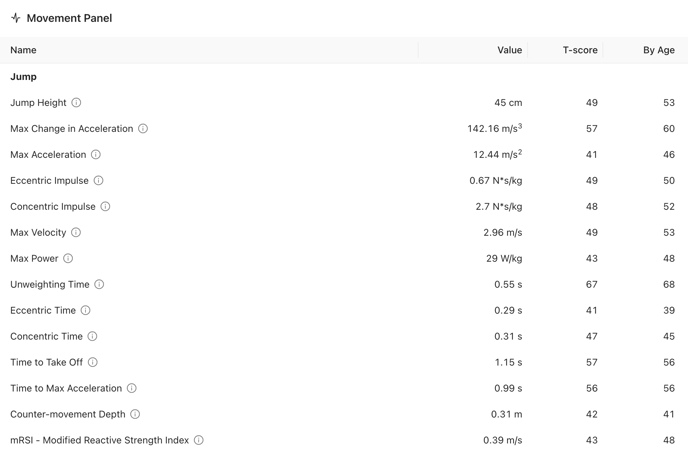 An additional contextual lens for viewing the data within the SMHP is by normalizing the results based on sex (Male, Female) and age (i.e. birth year).  Based on the birth year entered into the individual user profile, the calculated metrics are then normalized to our 10+ year aggregated dataset and displayed to the user.  Again, this data is normalized using t-scores, where the mean is 50 and the standard deviation (SD) is 10. Note that the raw data is also visible within the Movement Panel (see above). 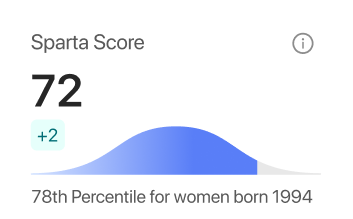 Percentiles are another common way to present data or information as normalized to a similar population or cohort. The previous “Normal, bell-shaped curve” image shows the relationship between percentiles and data distribution, as well as t-scores.  As many common health-related biomarkers are displayed as percentiles, the SMHP offers sex and age-based percentiles for key top-level metrics that add context to improve interpretability and understanding.

One of the key benefits of normalizing data is improving the ability for simple interpretation for both Subject Matter Experts and laypersons:

50 is the mean or average score for that population or cohort, with 10 being one standard deviation in either direction. For a user with a result of 50 as a score, this can be interpreted as the user’s score is “Average” for the selected population or cohort, or more simply, “Average as compared to similar users”. This can also be interpreted as the user’s score being higher than half or 50% of similar users. T-scores above and below 50 are then “Above average” and “below average,” respectively. Typical values for t-scores range between 40 and 60, as this includes one standard deviation (10) on either side of the mean. This can also be explained as the majority (about 68%) of the cohort’s values fall between 40 and 60.

For a user with a result of the 75th percentile, this can be interpreted as a score that is higher than three-quarters (75%) of similar users. This can also be simply understood as “Higher than Average” compared to similar users.

T-scores and percentiles represent two common yet different ways to normalize data for interpretation. A benefit of percentiles is that they provide an intuitive understanding of where a user’s score “ranks” in comparison to their peers. Percentiles are used for high-level Sparta metrics within the SMHP, where a higher score can be perceived as “better.”

For values or metrics where higher isn’t always to be perceived as better, for example, many time-based values, percentiles can be misleading. Additionally, for many biomarkers, “Average” or “Normal” is considered an acceptable or even optimal value (e.g. BMI, Blood Pressure). In this case, percentiles can also be misleading, as being in the 50th percentile is often perceived negatively. In these instances, t-scores can be a better way to normalize, contextualize, and interpret data. For t-scores, 40 to 60 can be considered typical, while values falling outside of those may warrant further investigation. An atypical score shouldn’t automatically be considered “bad,” as a typical score shouldn’t automatically be considered “good,” as the context here is critical.

The accurate interpretation of data requires context, and thus a “good” score is often context-dependent. Additional articles discussing some of the specific metrics should be reviewed to improve specific interpretation.

The SMHP provides percentiles for high-level user-facing metrics in instances where higher should be considered “better.” It also provides practitioners with simple normalized data to enable comparisons by sex and age, and the ability to monitor and observe improvements over time relative to the individual.

Secure data-sharing with our customers allows for the ingestion of critical outcome and context data into our machine-learning pipeline, enabling the development and validation of feature extraction and predictive modeling to create more meaningful data-driven metrics with easier direct interpretation.