Why doesn't Sparta report on measures of Peak Force?

Many variables that can be derived from force plates are often unreliable, invalid, or both. Research has shown that measures of peak force can be accurate (reliable) using quality measurement tools such as force plates, and sufficient standardization. So the question becomes whether or not this metric is valid. 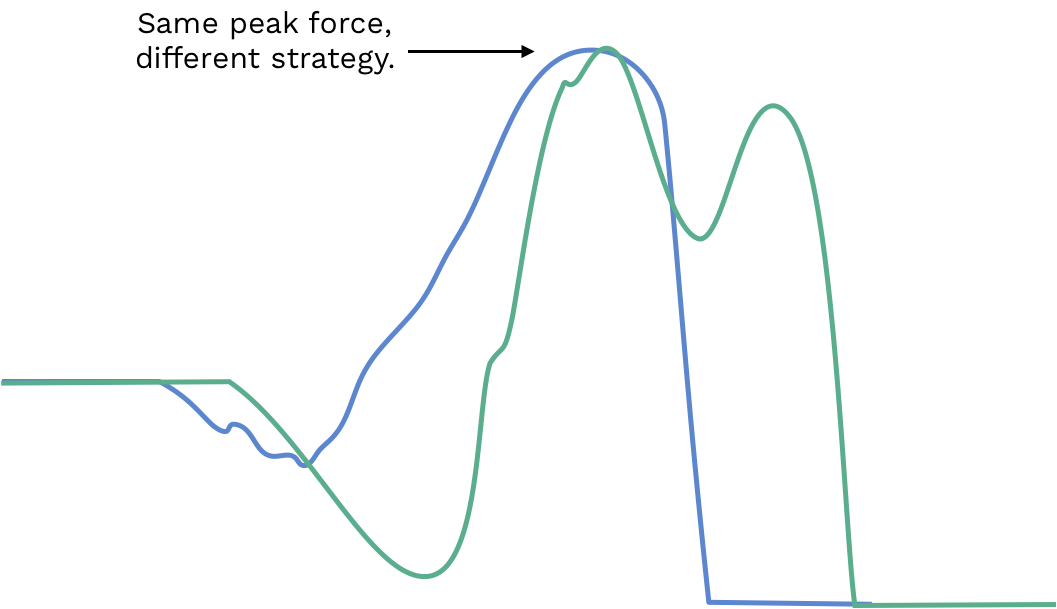 Peak force is a measure at a single point in time and thus tells us much less about HOW that force was produced. For example, two individuals can have similar peak force values but go about producing that force in two very different ways. When specifically looking at peak force, because it does not account for the timing of force production, it is a much less valid measure of movement and thus less meaningful.

If looking for a single quantitate value to compare individuals or track progress, look no further than Jump Height!

Force is a relatively misunderstood term but is particularly important for those individuals who are measured by their performance in their sport or military mission. When people think about increasing force, the number one thought is how to increase the amount of weight we lift. By squatting heavier, we move more mass. And if we have the ability to move more mass, the force will be higher. While this is a correct assumption, mass is only one part of the equation. When an individual moves: sprints, jumps, or lands they can produce and absorb up to 5 times their body weight, yet have we ever seen someone squat 5 times their body weight? Misleading visualization like the one below lead individuals to think that more weight means more force, and less weight (and higher velocity) means less force, but this is completely inaccurate. Here the word Force is used incorrectly, as it should instead be Load or Resistance.ᵃ 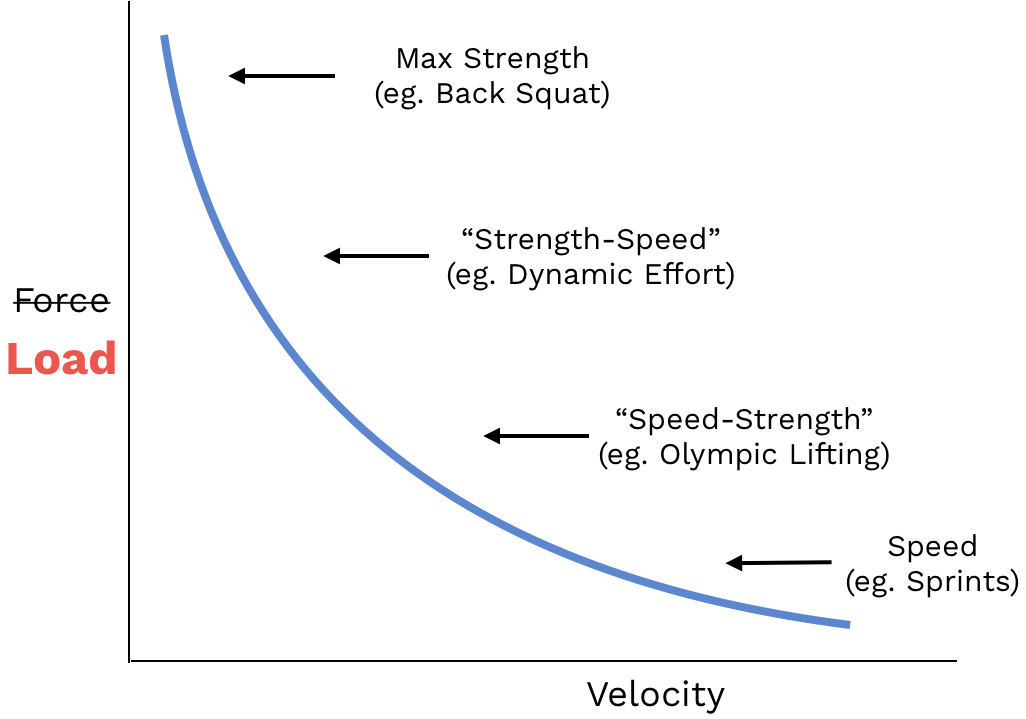 By definition, force has a component of TIME. The ability to create, absorb, and apply force has more to do with timing of our movement than simply mass or weight. Perhaps the best example of such timing is the situation of peak force versus average force. Peak force is a measure at a specific moment in time, and research has shown this metric can be accurate (reliable) using quality measurement tools such as force plates. So the question becomes whether or not this metric is valid. Peak force does not take into consideration time, which forces the measurement to be very specific and invalid as it relates to movement. The specificity refers to the population and the type of test. For example, a shorter athlete with strong Olympic lifting experience will outshine others in an isometric mid-thigh pull. How much force you create is just as important as how and when that force is created.

The average force allows us to look at the ability to produce this force over a period of time. Does an individual produce a large amount of force in an extremely short amount of time, or do they take much longer to produce that high amount of force? Both can have similar readings when looking at peak force but will go about achieving that goal in a much different way. This contrast is particularly evident when differentiating levels of athleticism or populations. A recent study showed collegiate soccer athletes had greater vertical jumping VELOCITIES than recreational soccer athletes, but no differences in peak power output or peak forces (1).

All movement relies on both on the quantity of force as well as the timing of that force. In sports, we can use the example of if the movement is offensive or defensive, reactive or calculated; timing matters. A short-stop in baseball needs to be quick to react to a hit, while a pitcher is able to be more deliberate and apply force over a longer amount of time. Human performance coaches have all seen the “strong and slow” and the “weak and quick” athletes subjectively for years. How does the athlete who cannot squat his own bodyweight jump out of the gym? He/she uses timing differently to produce larger amounts of force by decreasing time not increasing mass. The physics calculation of force clearly shows the superiority of time.

To increase the force by itself we must increase mass, increase distance or decrease time. In human movement, mass is relatively unchanged, as most of the time we are utilizing only our body weight, or a more standardized weight in athletics (equipment/implement) and military (equipment/gear). Mass is most often utilized as a training tool - resistance or strength training. Increases in distance can be achieved by utilizing longer ranges of motion, however, most strength training demands a strong relationship between range of motion and time so the intent of increasing distance traveled will increase time as well, keeping the ratio a constant. But time, not to mention the fact that it is squared in the calculation heavily favors quicker movements to boost force production. 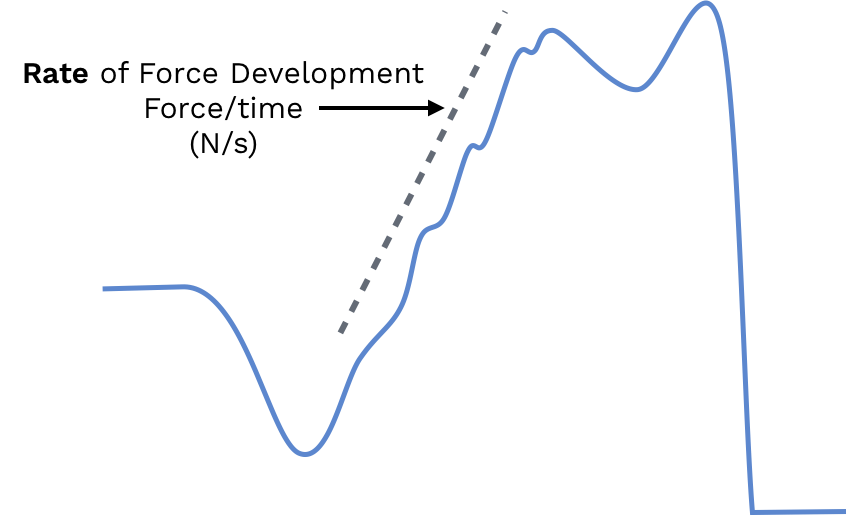 Time is so valuable that once force is measured, the aspect is often included again by dividing or multiply force by the value. Perhaps the simplest example is Rate of Force Development (rFD) which divides the Force by time required to produce it. Impulse, on the other hand, is Force multiplied by the time required to produce it. Certainly, we can all picture the value of rFD, producing force quickly is the heart of explosiveness, particularly in reactive sports. But what if I am a baseball pitcher or an outside hitter in volleyball where the goal is to impart velocity on a ball. These situations require precise timing to prolong force production, transferring energy to the ball for maximum speed. Contrary to what we often hear, more force in less time isn't always the most efficient path forward.

Often times coaches or practitioners are asking to see peak force because they are looking for one, simple metric to show progress over time. Unfortunately, there isn't and will never be one single BEST metric to evaluate human movement and/or changes over time.  People will often gravitate to peak force because research shows it is correlated with "performance" (jump height/1 RM).  So instead of reporting a metric that most people don't understand (peak force) because it correlates with a performance metric, why not report on the performance metric itself?! Jump height (while not perfect) is perhaps the best output measure to be utilized and reported on in this context. Relative jump height (jump height divided by body-weight) is another simple and reliable metric that can be utilized that will better control for an individual's mass, especially when comparing larger or more heterogeneous (differing) populations.

a. The REAL force-velocity curve has to do with single muscle fibers, not global human movement. The faster a muscle fiber contracts the less force it is able to produce as the fewer cross-bridges are able to occur.