Why does the Jump Scan utilize a jump with arm swing?

The Jump Scan assessment is performed using the simplest, most natural dynamic movement pattern: the vertical jump. The body is a system, and though we often think of it as split into the upper and lower body, or right and left sides, this is a man-made mental model that (while useful) is inaccurate. All movements (walking, running, jumping) are extremely complex sequences of total body movement. In turn, we specifically chose not to restrict the jump to remove arm swing, as this is a less valid measure of how the human body sequences as a system.

The first task when it comes to any measuring is a concept very near and dear to our hearts: reliability. Reliability is often overlooked because it isn’t sexy, but is it of the utmost importance. In the literature, vertical jump testing is often utilized without arm swing to help control for the potential variability it introduces which may decrease reliability. With a force plate capable of measuring data at 1000 times per second, we must first define which of these data we are going to evaluate the reliability of. The width of data that can be collected utilizing this technology is both a blessing and a curse. Utilizing measures from specific predetermined time points (50ms) or when a specific threshold is reached (peak/max) is much more common in the literature than looking at averages over time. These measures are not only purely quantitative but because they are taken at one specific time point, by nature they are much more susceptible to reliability issues. To control for this, familiarization sessions often need to be performed to get individuals comfortable with the setup and technique of the assessment required in order to ensure reliable data.

The variables of Load, Explode, and Drive, as represented in an individual’s Movement Signature, are not taken from a single time point but are averaged over the different phases of movement. This not only reiterates our goal to evaluate movement strategy but controls for the “variable” nature of utilizing arm swing. Analysis of our data shows that the internal consistency for LOAD and EXPLODE are excellent and that DRIVE is very good (near excellent). Furthermore, by averaging 3 out of 6 jumps performed in the Sparta Scan reliability is improved, as averaging can explain 90% of the variability within the assessment. Finally, the data is then normalized and represented as T-Scores relative to our database, utilizing means and standard deviations to identify meaningful change. Reliability is an extremely important concept. It is also important to understand that with the abundance of data points that can be collected with today’s technology, they are not all created equal. For example, many “GPS” units can measure distance traveled, heart rate, and decelerations; it is hard to state whether any single product is reliable or unreliable without some further investigation into each of the different variables collected.

It has been noted that utilizing arm swing may be best served with jump-specific populations, however, we have also found the vertical jump assessment variables to be homoscedastic: that is, being a skilled jumper (basketball/volleyball) doesn’t make for a better force producer. Skilled jumpers may show a higher jump height, but when we analyze that individual's Movement Signature the advantage is no longer there. Our assessment is not without standardization protocols, we simply choose to standardize by utilizing methods other than altering the individual’s natural movement: utilizing research-grade hardware, analyzing only reliable variables, averaging results, standardizing warm-up, and utilizing normative data to interpret results. Standardization is often bastardized as it decreases the “flexibility” of testing, however it is the best way to ensure the consistency and discipline required to collect reliable data. Perhaps even more simple is to understand that all humans (jumping populations and non) live on planet Earth, and are bound by the laws of gravity. The vertical jump serves as a great assessment for all because it is a reliable, simple, and practical assessment of dynamic human movement! 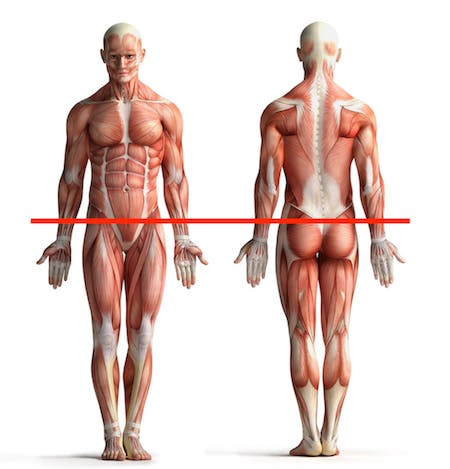 People often believe we have a lower body bias because we utilize the vertical jump as a primary assessment. Because of how we were educated, most of us as coaches, in reality, fall victim to a bias that we can simply chop the body in half and evaluate or train these segments individually. Unfortunately movement, and in turn the system of nerves, tendons, muscles, fascia, and other structures that support and create movement don’t adhere to the bodybuilding rule of the upper/lower split. We have historically cut the body into different pieces or segments primarily to simplify and improve comprehension when teaching how the human body functions. This has changed our perception and ability to understand holistic human movement to a simpler to understand yet highly inaccurate joint by joint approach… where everything (in theory) occurs in isolation. Jump tests are often used with the intent to measure pure lower body metrics such as strength or power; unfortunately (whether we utilize arm swing or not) this is a gross oversimplification of what is actually happening during these movements. Just as categorizing movements purely as “push” or “pull,” attempting to isolate tests of lower or upper body function while great in theory is largely inaccurate.

One common argument against the use of arm swing is that it has been shown to increase or affect performance (most notably jump height) when compared to not utilizing an arm swing. While this effect is real, an alternate viewpoint is just as valid: not utilizing arm swing shows to decrease or affect vertical jump performance. From an ecological validity standpoint, the majority of dynamic movements not only don’t restrict upper body movement, but require the arms (and the trunk, head, and neck) to be incorporated in order to enhance performance. The vertical jump with arm swing is a much more natural movement. Restricting the upper body will not only affect quantitative measures like jump height but alter an individual’s movement strategy as well. If the goal is to assess how (qualitative) and not just how much (quantitative), removing arm swing with hopes to decrease variability will also decrease the validity of the test as an assessment of an individual’s movement solution.

In order for movement to occur, individuals apply force into the ground, and the subsequent ground reaction forces propel the body in the desired direction. These forces travel down and up the kinetic chain as humans sequence through different phases of a movement. The magnitude and timing of these forces are responsible for the basketball athlete jumping through the roof, just as they are for the elderly couple crossing the street. If you simply ask an individual to jump as high as they can, they are going to use their upper body naturally. Now watch an athlete in their sport: jump, sprint, or decelerate… The more we restrict natural movements during assessments the more unnatural the movement becomes. If movement assessments if the technique is restricted attempts to evaluate movement quality in terms of sequencing and timing (strategy) of force production are extremely limited.