Load, Explode, and Drive are the three main variables measuring during the Jump Scan, and represent an individual's ability to Create, Transfer, and Apply force efficiently. These three phases occur in all human movement. The more effectively each individual is able to utilize these different phases the more efficient their movement is.

First, a bit of history... The terms Load, Explode, and Drive we actually used to call Rate, Force, and Time. In fact, we originally focused on just two variables (Rate and Force) but after years of collecting thousands of different variables we found concentric impulse, or Time, to be an important contributor to human movement. These terms, while perhaps more “accurate,” resonated much more with academics and scientists than coaches and athletes, and in turn the terms Load, Explode, and Drive became the nomenclature used to describe an individual’s overall results from our jump assessment; termed the Movement Signature™.

The Sparta software is utilized by sports organizations, military groups, and general populations alike, however much of the language and examples are more focused on athletes as it is much simpler for people to relate and understand these concepts. Agree or disagree with the nomenclature, the fact is this simple change has allowed us to better translate information to the masses to improve transparency, trust, and compliance - and in turn improved outcomes for the individuals we work with.

LOAD - How Efficiently do you Create Force?

The first variable we measure is Average Eccentric Rate of Force Development. This is measured during the downward phase of the jump and is a measure of how quickly an individual is able to produce force or start a movement. As is apparent by the mechanical definition, Load is a rate of force measured in Newtons per second (N/s) and is averaged during the eccentric (down) or what is also referred to as the braking phase of the jump. Load is the only variable from the Jump Scan that is not then divided by the individual's body weight (making it a relative value) because the individual's body weight is already accounted for at the start of the braking phase.

We often (though not always) see greater levels of Load in stronger individuals as they often have the ability to display this rate of force development. Those that are more anterior chain dominant through repetitive movements or staying in a "flexed" position for long periods of time. Offensive and defensive lineman, baseball and softball catchers, and rugby front row are three types of athletes that commonly assess this way. Sedentary individuals who spend large amounts of time seated in a flexed position can also have higher values in Load relative to their Explode and Drive. It is important to note because Load is a rate of force, we can often see individuals who may have less absolute strength (younger, sedentary, etc) with higher Load, often because they will move through an extremely short range of motion and create force quickly.

A sufficient Load represents the ability to produce force quickly and efficiently. Those with lower Load can suffer because with an inefficient start, force generation must occur in a different way, typically through the over-utilization of momentum. This is often the case with younger and untrained individuals, as well as those with previous knee or ankle (anterior chain) injuries that may alter individual movement mechanics. Like most things, too much is often just as good as too little, as those with higher Load (relative) can also be less efficient and at higher risk of injury because they are unable to dissipate the greater amount of force they create in the beginning of a movement.

With the movements we have seen that help improve Load typically have a few things in common. Most (¼ Squat, Front Squat, 1-Leg Squat) are very anterior chain dominant, and emphasize the ankle joint and quad musculature that are typically well developed in those with high Load. While some (¼ Squat, Back Squat, Bench Press, Deadlift) are typically done with higher intensities as bilateral movements typically more scalable in this way. Improving Load typically doesn’t happen overnight, as improving strength levels and altering joint sequencing require intent and time for adaptation.

EXPLODE - How Efficiently do you Transfer Force?

The ability to transfer forces effectively requires sufficient musculotendinous elasticity, as well as a strong and responsive connection between upper body and lower body segments (core strength and stability). These two qualities describe the EXPLODE variable, and are a prerequisite to minimize weak links in the kinetic chain.

The second variable we measure is the Average Relative Concentric Force. This is measured during the upward phase of the jump and is a measure of how effectively an individual is able to transfer force or transition a movement. Explode is a magnitude of force measured in Newtons per kilogram (N/kg) that is averaged during the concentric (up) phase of the jump, also referred to as the propulsive phase. It is important to note that while the time (s) isn't specifically in the units, Explode takes into account the timing of movement because the force is averaged throughout the entire up phase. We see higher Explode often in (you guessed it) “explosive” individuals as they often have great tendinous elasticity and those with higher levels of relative strength. Skill positions in football and basketball players are often blessed with high levels of Explode as this is often required for reactive acceleration and change of direction abilities. Explode is the variable that is probably best related to both relative strength and body composition, as leaner individuals will typically have a higher Explode as they will have less "non-functional" mass (fat).

A sufficient Explode represents the ability to transfer forces efficiently allowing for less wasted energy in movement. Those with lower Explode can suffer because, with an inefficient transition (or amortization phase), force is often leaked through the trunk or core in linear and lateral movements. For individuals with poor body composition, this can be due to the inability to support this larger mass without sufficient strength. Younger and untrained individuals with poor postural control, previous low back or pelvic injuries, and individuals with poor relative strength levels often assess showing a lower Explode relative to Load or Drive. In athletes that rotate for a living, baseball pitchers for example, this is also common as the transfer of forces occurs through dissociation or torque, not through straight lines. A high Explode can also cause issues as the reliance on tendinous structures especially around the hip can cause pain or injury.

Similar to Load, movements we have seen to help improve Explode have a few common threads. To start, Explode has proven to be a bit more stubborn than either Load or Drive to improve significantly which may be because it is more driven by less modifiable factors like muscle fiber type and musculotendinous stiffness. As discussed previously, body composition and relative strength are going to be a big factor and improving Explode as well, so while we often don't think about it about our nutritional practices absolutely have a large impact on how we move.  From an exercise standpoint, movements that require efficient bracing and transfer of force through the trunk such as Deadlift, Suitcase Deadlift, Wood-Chop, and Hang Clean have all been proven as interventions to help improve Explode. Often individuals with high Explode have very little traditional resistance training experience having only just played their sport. Jumps, throws, plyometrics, and ballistic training are critical for improving this variable as well.

DRIVE - How Efficiently do you Apply Force? 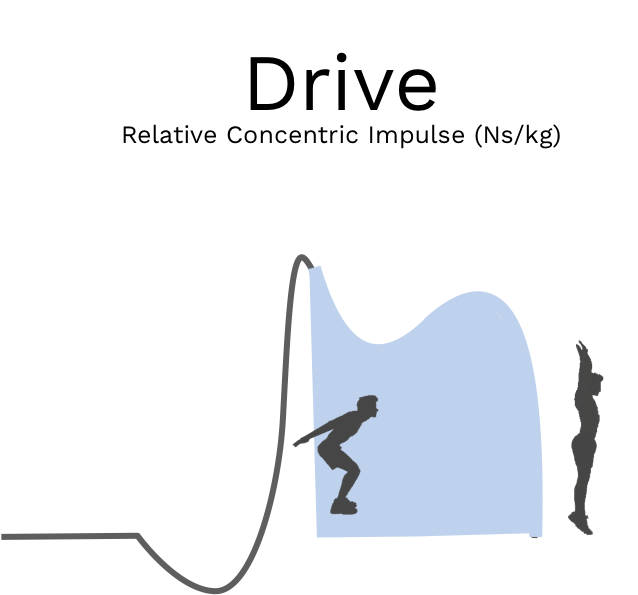 The final variable that gets represented in an individual’s Movement Signature is the Relative Concentric Impulse or Drive. Like Explode, this variable is measured during the upward phase of the jump, but an impulse (by definition) is a measure of both magnitude and duration of force. Impulse is a concept that is often confusing and misunderstood (and in turn glossed over or ignored) but is one of the key drivers of human movement.  A simple way to think about Impulse is the "summation" of force over time.  How much force and individual applies in total, dictates how far/fast they move! The units of Drive are in Newton-seconds per kilogram (Ns/kg). Drive is a measure of how efficiently an individual is able to apply or prolong force. We see greater levels of Drive often in individuals who utilize greater active ranges of motion in movement as they are able to apply forces for longer, and who are more fluid in their movement. Drive is negatively correlated with Explode and is often viewed as the less important factor to the more “sexy” Explode. However, it is important to understand that our ability to actually apply the force we create and transfer is often a limiting factor in movement efficiency. For example, while it would make sense that Explode is highly correlated with sprinting speed, Drive is almost just as highly correlated, with the combination of the two (Explode + Drive) having the greatest predictive ability of sprint speed in athletes.

A sufficient Drive represents the ability to apply forces efficiently allowing for better utilization of this energy that has been both created and transferred. One of the main costs of a lower drive is wasted energy that is often seen in the form of fatigue, what looks like an “out of shape” individual is often an inefficient force applier. Another concern with low Drive is a decrease in the dissipation of force and and reciprocal inhibition which often contribute to muscle strain injuries. However, a high Drive (relative) is often the cause of an overuse of momentum in movement as a lack of force generation and transfer requires a longer duration of force application for movement to occur. Like a lower Load and Explode, a higher Drive is common in untrained and younger individuals, as well as endurance athletes and yoga enthusiasts. We have also seen Cross-Fit athletes with high levels of Drive relative to Load and Explode as AMRAP (as many reps as possible) protocols often require more efficient use of momentum versus strength.

Again our Drive interventions typically have a few things in common. The RDL, Overhead Squat, and Split Squat all require greater active ranges of motion and mobility which are key components required to improve the efficiency of force application. Meanwhile, the Split Squat and 1-Leg Hip Thrust are posterior chain unilateral movements that are often performed much slower and emphasize activation and relaxation simultaneously. Another extremely common intervention for low Drive individuals is soft tissue manipulation which can have an effect on Drive both acutely and chronically (if performed frequently).

In summary, this (not that) brief primer on Load, Explode, and Drive can hopefully serve as a reference for those recently introduced to Sparta and a refresher for those who utilize the software daily. If you browse the pages of this site you will find countless articles relating to these three movement qualities which we have identified, measured, and studied for over a decade here at Sparta Science. As we continue to learn more based on others research and our own we will continue to evolve while keeping the goal the goal: to help individuals to reduce the risk of injury and improve health and performance.